Lovers in Arms is a historical m/m romance novel.

The year is 1946, World War II is over, and the Nuremberg trials are underway. US Army Captain Frank Hawthorne is returning to Germany to testify in the military tribunal of former Nazi Officer Johann von Biehn. Despite explicit orders to the contrary, Frank is trying to save Johann's life.

Three years ago, at the height of the war, Frank had been sent to kill the very man he is now defending. Much to his surprise, instead of the Nazi monster he was sent to kill, Frank found a compassionate dissenter. Johann considered the handsome young American officer the answer to his desperate prayers to save his beloved Germany from the cancerous infection of Nazi rule.

What really happened between the two men during those long summer days in von Biehn’s Spreewald mansion must be kept secret at any cost. With his own government forbidding Frank to reveal anything political that happened during the war, and society forcing him to conceal their personal relationship, Frank will have to find something truly unexpected to prevent Johann's all-but-certain death sentence. 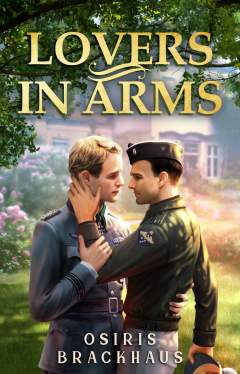 Cover art by the lovely and talented Natalya Nesterova.

Goodreads reviews for Lovers in Arms

The book is available via Amazon, Kobo,  Smashwords , Apple and most other online retailers.

In case your favourite shop does not yet sell 'Lovers in Arms', please let us know and we'll fix that!

The Spanish translation, 'Amantes en Armas', will soon be made available via most outlets, too.