An out-of-control psion is killing innocents on idyllic Shiraz. On their first outing together as Knight and Squire, Yaden and Ivan are sent to neutralise the threat. But that threat turns out to be a little girl on the run from the Psions Guild, fighting for her life. Naturally, their mission objective changes from ‘neutralise’ to ‘protect at all costs’.

While Yaden tries to figure out exactly what and who they are up against, Colin has to find a bigger home for his growing family even as a powerful, traumatised girl is dropped into his care.

Is it just one rogue psion who wants her dead, or is it the entire guild they are up against? In their own way, both Colin and Yaden will have to face powerful guild psions to ensure that their little family survives.

‘The Renegade Psion’ is a planet-hopping mystery adventure, a found family celebration and book 3 of the Virasana Empire: Sir Yaden series. 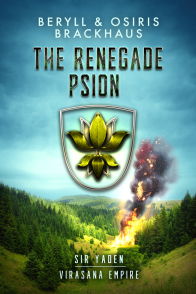 The cover for 'The Renegade Psion', once again by Anna Sikorska.

'The Renegade Psion' is available at all usual retailers, for example on

The book was published on March 10th, 2020. In case your favourite retailer does not offer the book, please let us know and we'll fix that!