The Pet and his Duke

Robert is a pet, a human pleasure slave, and well past his prime.

So when teenage Duke Thomar of Aylian buys him via mail order, Robert first suspects a dreadful misunderstanding. The duke is young, handsome and headstrong, and the very last thing he needs while struggling to secure his reign over his planet is an aging bargain bin pet by his side.

Only, the more time Robert spends with Thomar, the more he learns that the young duke rarely makes mistakes. Unless, of course, Thomar dashes off on one of his mad adventures, which Robert increasingly becomes a part of…

‘The Pet and his Duke’ is a standalone m/m romance novel in the ‘Virasana Empire’ universe. Written by Rainbow Book Award winners Beryll and Osiris Brackhaus, it is a story of self-determination and love, and Happily-Ever-Afters in the most unlikely places. Warning: contains slavery, non-con and lots of fluff. 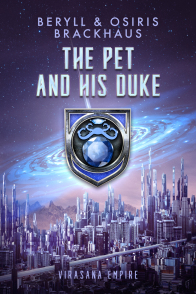 The cover for 'The Pet and his Duke', once again by the lovely Ana Tiferet Sikorska.

Where to get the Book

'The Pet and his Duke' was released on June 18th and is available at all the major retailers, for example here:

Should your favourite retailer not offer the book yet, please let us know and we'll fix that!