A charming, screwball-y paranormal m/m romance about ancient magic meeting modern men, and how true love still is the strongest magic of them all.

Left to die in a sealed tomb, David, an educated and good-natured New York arts dealer and part-time forger, stumbles over an old oil lamp. But instead of producing a little light for David’s last hours, it conjures forth a veritable djinni.

An ancient, tempting, puckish djinni, who in David’s company prefers to show himself as an irresistibly handsome, fit and barely legal teenager. Quite literally an incarnation of trouble waiting to happen.

So what’s a modern man to do with his three wishes, when he can have anything except the one thing he truly desires - to mend his broken heart? 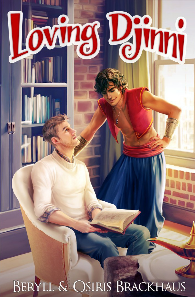 #1 Besteseller overall, as well as Romantic Comedy and Romantic Fantasy!

Of course, we also offer a reading sample of 'Loving Djinni'. You can download the file below, copy and pass it on freely!

Note to all who downloaded a reading sample before April 12th, 2016: Early reader feedback has pointed out some remaining errors in the reading sample. A secondary proofing run has been made, and the corrected file is offered above. Sorry for the mess. ***

The ebook can be ordered at Amazon.com, Barnes & Noble, Smashwords, AllRomanceEbooks, iTunes and many others. There is even a print version available at Amazon.com or directly at Createspace.

If you are looking to buy a signed copy, please contact us directly!

Keep an eye out on our newsfeed or subscribe to our newsletter to keep up with any updates!