Exploring a newly discovered system shouldn’t have taken Yaden and Ivan more than a few days. But suddenly, they find themselves stranded in a faraway galaxy, way outside the reach of even the strongest guild psions.

Their only chance of ever finding a way back home is to make allies among the truly alien locals, and find a way to deal with the powers-that-be: the brutally isolationist Calarni. Their crystalline technology is superior to anything the Empire has ever seen, and might just be the missing link to the original builders of the mandalas…

Written by award-winning authors Beryll and Osiris Brackhaus, ‘Calarni’ is a riveting space opera adventure and the sixth book and mid-season-spectacular of the ‘Sir Yaden’ series. 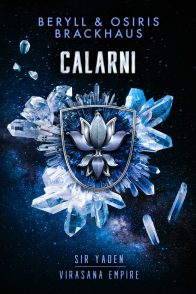 The cover of 'Calarni', once again by Anna Tiferet Sikorska.

'Calarni' is now available at all usual retailers, for example on:

The book was published on July 28th, 2022. In case your favourite retailer does not offer the book, please let us know and we'll fix that!