The Emperor cares for each and every one of his subjects, be they bartender or prince.

Prince Ishikawa of Shang Zhou has embarked on a risky undercover adventure all on his own, and Yaden and Ivan are sent after him to make sure he comes out alive.

Working as the crew of a local pub, the three of them try to figure out why the local military is training Vox Populi terrorists. But this is a Lotus Knight mission, and when Ivan’s sister finally decides to ‘rescue’ her brother, things escalate rapidly…

Written by award-winning authors Beryll and Osiris Brackhaus, ‘The Shang Zhou Shuffle’ is a colourful space opera adventure and the fifth book of the ‘Sir Yaden’ series. 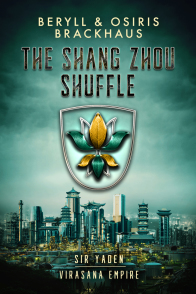 The cover of 'The Shang Zhou Shuffle', once again by Anna Tiferet Sikorska.

'The Shang Zhou Shuffle' is available at all usual retailers, for example on:

The book was published on January 13th, 2022. In case your favourite retailer does not offer the book, please let us know and we'll fix that!