This standalone paranormal m/m romance about cops and rent-boys, werecats and vampires is the first book of the ‘Smilodon Pride’ collection.

Connor’s life used to be the dream of any cultured werecat. He spent his days in Paris’ gay quarter with comfortably little real work, playing the piano, surrounded by art, fine food and good friends. Now, a feral vampire preys on the prostitutes of ‘his’ quarter, killing the boys of the Marais one by one.

When Connor invites a newly arrived hooker to stay on his houseboat, the last thing he expects is Michel to be a member of the Brigade Criminelle - a troubled, hunky rookie cop sent undercover to explore Connor’s connection to the murders, picked mostly because he had been a boy of the Marais himself, not so long ago.

Hiding their true natures becomes a problem for both when their initial attraction becomes much more than they ever thought possible. But in order to bring down the serial killer and maybe have a chance at making their relationship work out, one of them will have to take the first, critical leap...

Would you like to know more? Have a look at the Extras - additional material about the book you'll find nowhere else. 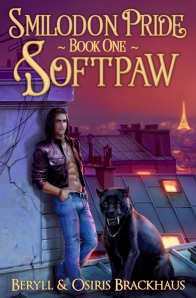 Coverart by the incomparable Natalia Nesterova.

If you like, we also offer a 30-page reading sample of 'Softpaw'. You can download the file below, copy and pass it on freely!

Softpaw is available as ebook on Amazon, Smashwords, Barnes & Noble, Kobo, and iTunes. More buy-links will be added as soon as they crop up!

The print version is available via Amazon.

Keep an eye on our newsfeed to keep up to date!