Sunchaser is a non-romantic road-movie about a werecat drifter, a wide-eyed human girl and a defective werewolf learning that sometimes, family really is the ones you didn’t pick.

It is the second book of the Smilodon Pride Collection, but not a direct sequel to 'Softpaw'.

Ain't nothing wrong with playing human – it's the other humans that ruin the fun.

After too many weeks as a New Mexico farm hand, werecat Roan desperately needs to get out of town or he'll start eating idiots instead of ignoring them.

But he discovers an abused werewolf in the pen of a travelling circus, and even though he can't stand the „dogs“, he decides to rescue his fellow werecreature. Except, the Sheriff's daughter Betsy had the same idea.

Together, they manage to fuck up a perfectly good rescue operation and Roan catches a chest full of lead. Which isn't enough to kill a werecat, but now Roan is on the run to Mexico with overeager Betsy and their crippled werewolf charge in tow.

They will have to overcome their prejudices and grow into a family if they are to outrun the police, angry parents, jealous fiancees and vengeful circus fey hot on their heels. 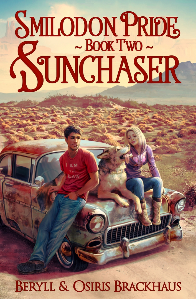 The cover for 'Sunchaser', once again by the incomparable Natalia Nesterova.

And just because it's so pretty, here's a closeup of our three protagonists. (From left to right: Roan, Martin and Betsy) Click to enlarge.

For the release of Sunchaser, two kind review sites have published character interviews with Roan and the gang - check them out, they're fun!

If you like, here is a 30-page reading sample of 'Sunchaser'. You can download the file below, copy and pass it on freely!

Sunchaser is available at all the major retailers - at

Sunchaser is available not only as ebook, but also as shiny paperback everywhere, ie at Amazon and Createspace.

Of course the book is up on Goodreads!

Subscibe to our Newsletter or check out our Newsfeed to keep up to date!