The Windmines of Bora Bora

Betrayed by his sister and sold into slavery to die in the dreaded Windmines of Bora Bora, Ivan has nothing but sarcasm and spite for the Lotus Knights’ well-worn catchphrase. No one ever cared for him - not when he was a young noble, not as a tortured Quetzal pet, and definitely not as a runaway slave gang leader in the slums of Yaiciz.

But all that changes when one of his fellow inmates turns out to be a genuine Lotus Knight, offering help and a way out of this misery. Suddenly, even Ivan can’t help but feel like there might be something good in his life to look forward to.

The Windmines of Bora Bora is a dark, snarky adventure and the the second book of ‘Sir Yaden’, an epic SF saga of grand adventure, bromance and patchwork family, set in the multi-faceted Virasana Empire. 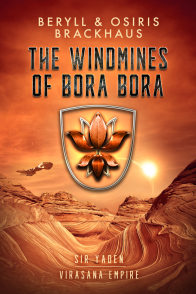 The cover of 'The Windmines of Bora Bora' has once again been designed by Anna Tiferet Sikorska.

'The Windmines of Bora Bora is available at all the major stores, for example on

It was published on August 13th, 2019. In case your favourite retailer does not offer the book, please let us know and we'll fix that!