Many consider the catchphrase of the imperial Lotus Knights to be nothing more but well-polished propaganda, but for Yaden, it is a way of life.

A young Lotus Knight himself, his first mission in service of the Emperor sends him to the remote village of Hagermarsh, a suspiciously friendly place on a planet known for its inhospitable people. But how to uncover a demonist coven when nothing bad ever happens?
Getting to know the villagers only makes things more difficult - the motherly fishmonger surely isn’t a demonist. Nor the gruff leader of the local militia. And definitely not the cute baker from across the street.

Come discover a dazzling, hopeful universe of knights and monsters, of psions, aliens and ancient deities! The Demon of Hagermarsh is the first book of ‘Sir Yaden’, an epic SF saga of grand adventure, romance, bromance and family, set in the multi-faceted Virasana Empire. It is a romantic adventure and can be read as a standalone. 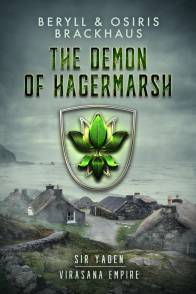 Once again, the cover has been designed by the lovely Anna Tiferet Sikorska. 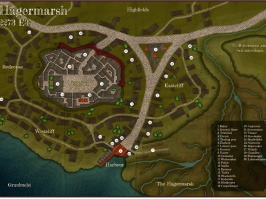 Bonus: A map of Hagermarsh as it looked before the events of the book. :)

The Demon of Hagermarsh - Free 30-page reading sample!
Here's a free reading sample to download and share as you like. Hope you enjoy reading it as much as we did writing!
Hagermarsh 2019-05-09 RS.pdf
PDF-Dokument [401.9 KB]

Where to get the book:

'The Demon of Hagermarsh' is available via all the major retailers since June 3rd, 2019.

You can get it at

Amazon.com (and all other national Amazons)

Should your favourite shop not offer our book, please let us know and we'll correct that.